By Paavo Monkkonen and Kate Traynor

One possibility: Repealing Proposition U. The measure, approved by LA voters in 1986, cut the  Floor Area Ratio (FAR) — the relationship between the lot size of a property and the amount of development permitted for that property — in half for most of the city’s commercial- and manufacturing-zoned land. It permanently and dramatically decreased the development potential of LA’s commercial corridors, and has gone down in history as a key driver of LA’s notoriously low-slung urban form (see Figure 1).

We studied the impacts of Proposition U and found that the Height District-1 (HD-1) corridors it created have become home to current and future transit stops and a range of retail and cultural amenities, with no discernable effect on the property values of nearby homes. The corridors would be the foundation for walkable, transit-oriented, and mixed-use neighborhoods, and the creation of new space for housing that does not harm the equity of surrounding homeowners — that is, if housing could be built housing on top of retail. As a consequence of Proposition U, however, it cannot, and the full potential of these sites cannot be realized.

The LA City Council has tried to get around FAR limitations with some success, including two new Residential Accessory Services (RAS) zoning designations that facilitate housing development with ground floor commercial space. RAS designations have restored residential potential to sites where Proposition U removed it and created an estimated 10,900 units between 2002 and 2010. [1] But use of RAS zones is rare, constituting a tiny fraction of HD-1’s total land area. Thus, they hardly make up for the limited FAR imposed on the entire HD-1 by Proposition U, and are a patchwork solution to a problem that can only be solved by full repeal.

Origins of Proposition U

When voters were considering Proposition U, the Los Angeles Times urged a “No” vote on the measure, calling it “the most extensive one-shot effort to limit future development in the city’s history.”[2],[3] So how did it manage to pass by a 2-1 margin?

Proposition U was born of a petition, “the initiative for reasonable limits on commercial buildings and traffic growth,” that landed on the 1986 general election ballot thanks to signatures primarily from the affluent homeowners of the San Fernando Valley and the Westside. “Anti-growth” community groups supported the measure, agitated by the traffic congestion they associated with the high-density commercial and office construction that often took place along major boulevards in hot real estate markets such as Westwood and the south Valley. Some scholars have characterized Proposition U as a handout to wealthy homeowners on the principle that zoning for lower residential densities tend to increase home values.[4],[5],[6]

The “pro-growth” contingency that opposed Proposition U included developers and labor leaders concerned that the initiative would prevent businesses from locating in LA.[7] Notably, developers and business associations who opposed the downzoning did so on the basis that the value of their property would decrease. The Boulevard Business Association in Atwater Village stated in an opposition letter that the zoning changes would limit development and reduce the marketability of property on Glendale Boulevard.[8] Both sides believed that tightening land use regulations would benefit homeowner property values while harming commercial values.

To date this assumption has remained untested and the impact of Proposition U on land development has been hard to gauge. It came during a lull in the economy when the city was already seeing an overall drop in applications for construction permits.[9] Additionally, historic parcel level research is difficult given the limited availability of point-of-sale transaction data.

The findings suggest that the value of each commercial parcel is lower due to diminished development potential. In the years immediately following the Proposition U downzone, commercial prices did not experience any broader increase due to scarcity of supply (see Figure 2). As for residential property, prices continued to climb unabated after Proposition U (see Figure 3), but the trend line is too consistent to attribute any boost to the measure, and we conclude that it had no effect on residential property. 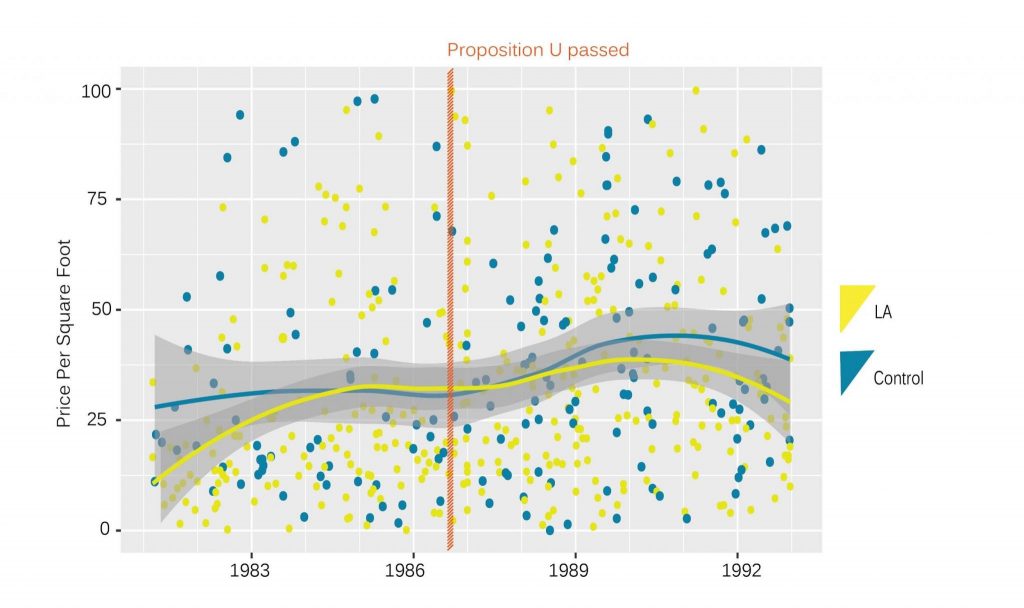 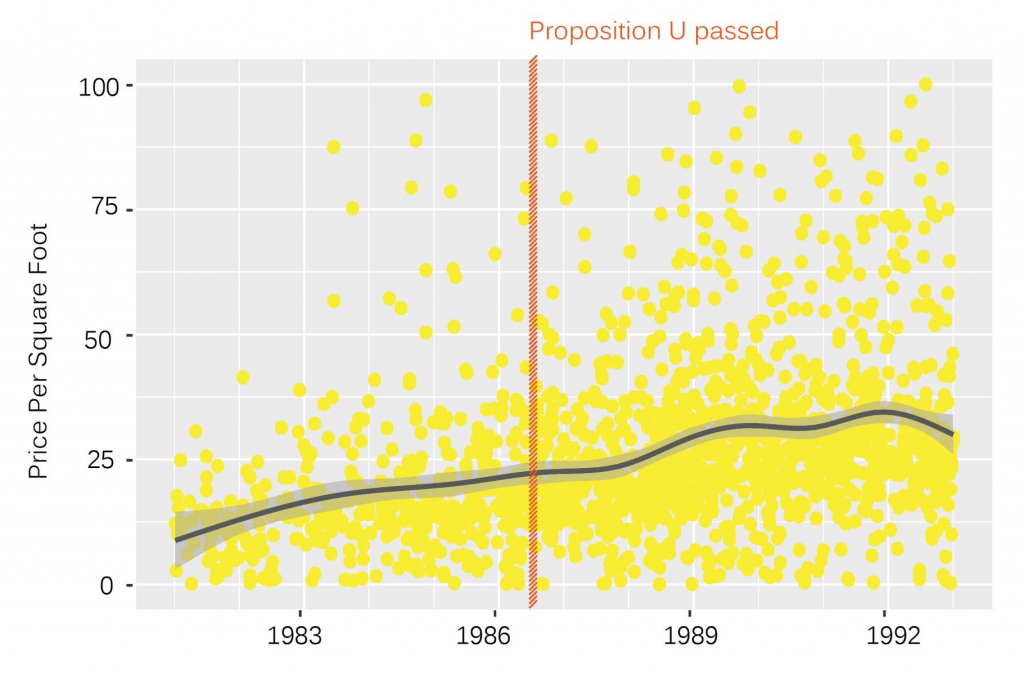 In brief, commercial prices stagnated after Proposition U while residential prices were unaffected. Based on this analysis alone, the commercial price stagnation after 1986 cannot be attributed exclusively to Proposition U. Confounding factors include the nature of historical controls, substantial data limitations, and the obscuring effect of the dramatic real estate market shifts in the late 1980s and early 1990s.

Repealing Proposition U is a critical first step to increasing LA’s housing supply, as it would enable the construction of mixed-use development along commercial corridors. And if resident opposition to density on commercial corridors is based in beliefs about the impact of development on residential values, our study has demonstrated that those fears are unfounded. The only price impact of Proposition U was a reduction in commercial property values. Restoring the development potential of HD-1s would drive private investment to areas that have not yet attracted revitalization, and a repeal could initiate a surge of transit-oriented housing in walkable, amenity-rich neighborhoods. Further, by directing development to underutilized corridors with low housing inventories, a repeal would alleviate pressures on existing residential areas who wish to preserve community character.

[6] Kok, Nils, Paavo Monkkonen, and John M. Quigley. 2014. “Land use regulations and the value of land and housing: an intra-metropolitan analysis.” Journal of Urban Economics 136–148.