California’s worsening housing crisis has triggered an intense debate about rent control. Rent control has always been controversial: Seen by some as essential to protecting vulnerable households from increasing rent burden and displacement, and by others as a well-intentioned but flawed action that often makes housing affordability worse. The rent control debate has been taken statewide with citizen action, massive political expenditures, and a flurry of legislative activity.

In 2018, more than $100 million was spent on Proposition 10, a ballot initiative allowing cities to expand their rent control programs. Specifically, it would have repealed the Costa-Hawkins Rental Housing Act, a state law that limits the extent of local rent control. That initiative was defeated at the polls by a 59-41 margin, and legislative efforts to repeal or reform Costa-Hawkins also failed in 2018 and 2019 (AB 1506 and AB 36, respectively). In 2019, the state legislature passed a more modest cap on rental housing over 15 years old, limiting rent increases to 5 percent plus inflation. Looking ahead to 2020, another Costa-Hawkins reform initiative will probably be on the ballot.

These statewide efforts have drawn the most money and attention, and can create the impression that rent control’s efficacy depends entirely on state action. However, local jurisdictions already have considerable leeway in establishing and/or reforming their own rent control policies. In this brief, we examine one such opportunity in the design of Los Angeles’ rent-stabilization ordinance — the minimum and maximum limits on “allowable rent increases.”

Los Angeles’ rent-stabilization ordinance (RSO) limits annual rent increases on approximately 600,000 homes, representing more than 40 percent of total units and nearly 70 percent of rental housing in the city. Rent stabilization protects tenants from large rent hikes once they move into a home, only permitting landlords to raise rents by a rate determined each year by the city’s Housing and Community Investment Department. In Los Angeles, as in many other California jurisdictions with rent-stabilization programs, these “allowable rent increases” are tied to annual changes in the consumer price index (CPI).

The Costa-Hawkins Rental Housing Act prohibits cities from expanding pre-existing rent control programs to most newer buildings. This prohibition includes Los Angeles, where the rent-stabilization ordinance applies almost exclusively to multi-family rental housing built before 1979. Costa-Hawkins also mandates “vacancy decontrol,” a policy allowing landlords to set rents at the market rate when tenants vacate their unit. The law does not, however, prohibit cities from modifying their rules relating to maximum annual rent increases.

The allowable rent increase limits in Los Angeles are the result of a 1985 compromise between two opposing political factions. The city passed a rent-stabilization ordinance in 1979 that limited rent increases to 7 percent annually. Six years later, tenant advocates argued for increases to be capped at 65 percent of CPI, while landlords wanted to maintain the 7-percent limit. Either plan would have required support from the majority of City Council, and there was concern that neither proposal could secure enough votes to pass. The compromise plan, which established the 3- to 8-percent range, won approval in a 12-2 vote — what the Los Angeles Times called  “a surprisingly large margin.”

These increases were passed at a time when inflation was relatively high, and on the tail end of a long period where inflation had not just been high but where policymakers worried it could not be controlled. The inflation rate in the Los Angeles region, measured as a 12-month average from October through September, peaked at 15.8 percent in 1979-1980 and was at or above 7 percent from the inception of the rent-stabilization program through 1982. However, it fell sharply to 1.5 percent in 1983 and then rose again to approximately 4 to 5 percent for the next two years. With the country beginning to recover from the runaway inflation of the past decade, in which the national inflation rate had not fallen below 3 percent since 1973, the compromise plan approved in 1985 may have appeared favorable to tenants.

Figure 1. Changes in the consumer price index (CPI-U) have regularly fallen below LA’s minimum allowable rent increase since the 1990s, and especially since 2009. 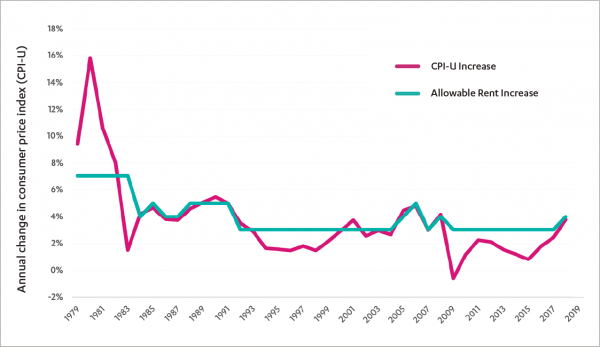 The consumer price index increased between 3 and 6 percent every year from 1985 through 1994, meaning that CPI and allowable rent increases were closely aligned. Over the next 16 years, through 2009, CPI fell below 3 percent 10 times. The trend has accelerated in the last decade: The inflation rate plunged into negative territory in 2009 and remained below 3 percent every year until 2018, averaging about 1.4 percent over this time period.

While these numbers may sound small, the consequences for low-income renters have not been. Had LA rent increases been tied directly to the CPI instead of an arbitrary range, a long-term tenant with a $600/month lease in 1994 would be paying a maximum of $1,089 in rent in the same home today. Under current law, the same tenant is instead paying up to $1,358 — nearly $300 more per month, or an additional $3,200 annually. (Approximately 300,000 Angeleno households earn $25,000 or less each year.)

The share of tenants who stay in the same home for 20 years or more is very small, but this policy has a significant impact on more recent movers as well. Someone who moved into their home in 2009 and paid $1,200 could have seen their monthly rent increase to $1,411 by 2018, according to CPI calculations, but may instead be paying up to $1,628 under the city’s minimum 3-percent rule. A tenant who moved into a $1,500 unit as recently as 2015 could have a monthly rent $100 greater than if their rent increases were tied directly to inflation ($1,655 vs $1,756 per month).

Table 1. Rent increases have been permitted to outpace the inflation rate for rent-stabilized homes in Los Angeles.

If policymakers want to strengthen tenant protections but don’t want to run afoul of state laws, they may consider eliminating the 3- to 8-percent limitations and tying annual allowable rent increases directly to the CPI. If inflation is 1.2 percent, rent increases would be capped at the same rate; if inflation was 3.8 percent, that would be the maximum allowable rent increase for the year. This solution would be the simplest and most responsive to different circumstances in the future. It would also eliminate the discrepancy between inflation and rent growth.

The city could also limit rent increases to a fraction of CPI (as is done in San Francisco, Santa Monica, and elsewhere), which some tenant advocates have called for since the inception of rent stabilization in LA. However, in its 2010 report the city’s housing department stated that it “fails to find an appropriate policy basis for expansion of the discounted CPI to the Los Angeles RSO” (LAHD Supplemental Rent Study Transmittal, pg. 3). Similarly, an Economic Roundtable report stated that CPI, not a portion of it, “is the best available economic benchmark for setting rent increases, although it has weaknesses as well as strengths,” and that it “fairly balances the interests of renters and owners.”

Another option is to adjust the range. A 2010 report by the city’s housing department recommended widening the range of allowable rent increases to 2 to 9 percent, and that the adjustment be rounded to the nearest tenth of a percent rather than the whole number. However, this change was not adopted at the time, and it still would have resulted in allowable rent increases outpacing inflation for a number of recent years.

One concern with eliminating the low-end limit — setting allowable rent increases equal to the change in CPI, whatever it may be — is what would happen if the inflation rate again fell below zero. Would landlords be forced to lower their tenants’ rents by a small amount? A mandated rent reduction would be much more intrusive than a maximum limit on how much landlords may increase their rents. Yet this problem is not unsolvable. The city could establish a 0 percent lower bound for rent changes in rent-controlled units, or it could “bank” negative changes in the CPI for future years. For example, if inflation fell by 0.5 percent in one year and increased by 1.3 percent the following year, the allowable rent increase in the second year could be 0.8 percent (1.3 minus 0.5).

Finally, there is the question of whether anything is owed to those whose rents have climbed faster than inflation over the past five, 10, or 20 or more years. Some tenants, especially long-term renters, may have seen their lease rates increase upwards of 50 percent while the consumer price index grew by barely half that amount. A temporary rent freeze may be a reasonable form of compensation for such residents, allowing them to “catch up” to the rent increases that have outpaced inflation for so many years.

Beyond the immediate implications for Los Angeles renters, the 3-percent floor on allowable rent increases illustrates the risks of failing to revisit earlier legislation — laws and programs that were enacted at a specific time, in a specific context, that may be ill-suited to today’s needs. Much has changed in the 34 years since the city’s floor on rent increases was last reformed. During this time we have seen a rapid run-up in housing costs, a massive crash of the housing and financial markets, and a Great Recession in which the inflation rate dipped into negative territory for the first time in more than half a century. Rent stabilization in the city, however, remains governed by regulations brokered in a time of lower housing costs, higher inflation, more homeownership, and less tenant influence.

Some U.S. politicians have suggested that all laws should automatically sunset, meaning that they should expire after a set amount of time to avoid becoming redundant or out of date. This proposal may be too extreme, unnecessarily introducing uncertainty and political gamesmanship into every aspect of the government, but the spirit of the idea has merit. Laws shouldn’t automatically expire after 10 years, perhaps, but we might mandate that they be reassessed on a 10-year cycle. During that reassessment, we could ask ourselves what’s working, what’s not, and how circumstances have changed since the last evaluation — and whether reforms are needed to respond to those new circumstances.

At the very least, the time seems ripe for policymakers to reevaluate LA’s rent-stabilization ordinance and its minimum allowable rent increases.