By Paavo Monkkonen and Spike Friedman

Before becoming governor, Gavin Newsom set forth a bold campaign goal to alleviate California’s housing affordability crisis: constructing 3.5 million new homes by 2025. And in his first State of the State speech, Newsom announced a $750 million incentive package so cities and counties could update their housing plans to make space in their zoning for more new housing. The ambitious new goals around housing production would further statewide environmental, economic and social priorities, as expressed in the Sustainable Communities and Climate Protection Act of 2008, by allowing more people to live in urban neighborhoods of opportunity. This homebuilding plan would also represent an unprecedented surge of housing construction for the state, which has averaged 80,000 new housing units per year over the past decade. Newsom is proposing a sevenfold increase.

In this brief, we ask whether it is possible for California to meet this lofty production goal under current zoning and where this new housing will be built.

The way we answer these questions is by looking at California’s existing planned capacity for new housing. State housing law requires every municipality and unincorporated area to report the potential for new housing in their jurisdiction in the General Plan’s Housing Element. Examining this measure of planned capacity allows us to identify where the state currently has more planned housing capacity. Thus, we can ask: if we follow the state’s current land use plans, how much housing can be built? Would it be built where people want to live? How would following current plans affect sprawl and inequality?

We assess planned housing capacity statewide to determine whether California is currently capable of meeting Newsom’s ambitious goals. To do this, we examine the Housing Element of each of the state’s 525 municipalities and unincorporated areas, summing up their current planned capacity.

State housing law mandates that each city and county zone for sufficient new housing construction to accommodate expected household growth. Through the state’s Regional Housing Needs Assessment (RHNA) process, population and household growth are first projected at the regional level and each jurisdiction is then assigned a target number of housing units at different income levels. The Housing Element Law requires that municipalities plan to accommodate this target for more housing units, and the Department of Housing and Community Development (HCD) reviews every city’s Housing Element for compliance. Recent state laws SB 35 and SB 828 have prompted the HCD to make Housing Elements more easily accessible online. This analysis benefits from those efforts.

California does not have enough planned capacity

California has currently planned for roughly 2.8 million new housing units, more than 700,000 units short of Newsom’s goal (Table 1). But that idea of a deficit is incomplete because planning for new construction is not the same thing as building new housing units. Historically, only a fraction of planned units are actually built. For example, over the Housing Element planning period covering 2003-2014, permitted construction only met 47 percent of assessed needs. The bulk of these permits, moreover, were for single-family housing units. By this standard, California would need to plan for more than 7 million new housing units to reasonably expect 3.5 million to be permitted for construction.

Planned housing capacity remains unbuilt for many reasons. For example, parcels in more urban cities that are considered as potential residential sites are often used in ways that complicate redevelopment. Sites are developed for a smaller number of units than legally allowed because of parking requirements, community opposition, or other features of the zoning code. In rural areas with lots of planned capacity, there is simply not demand for new housing. A recent study from UC Berkeley demonstrates that in the Los Angeles region, the bulk of construction that meets zoning requirements is still subject to local oversight that can delay or derail projects at the permitting stage. 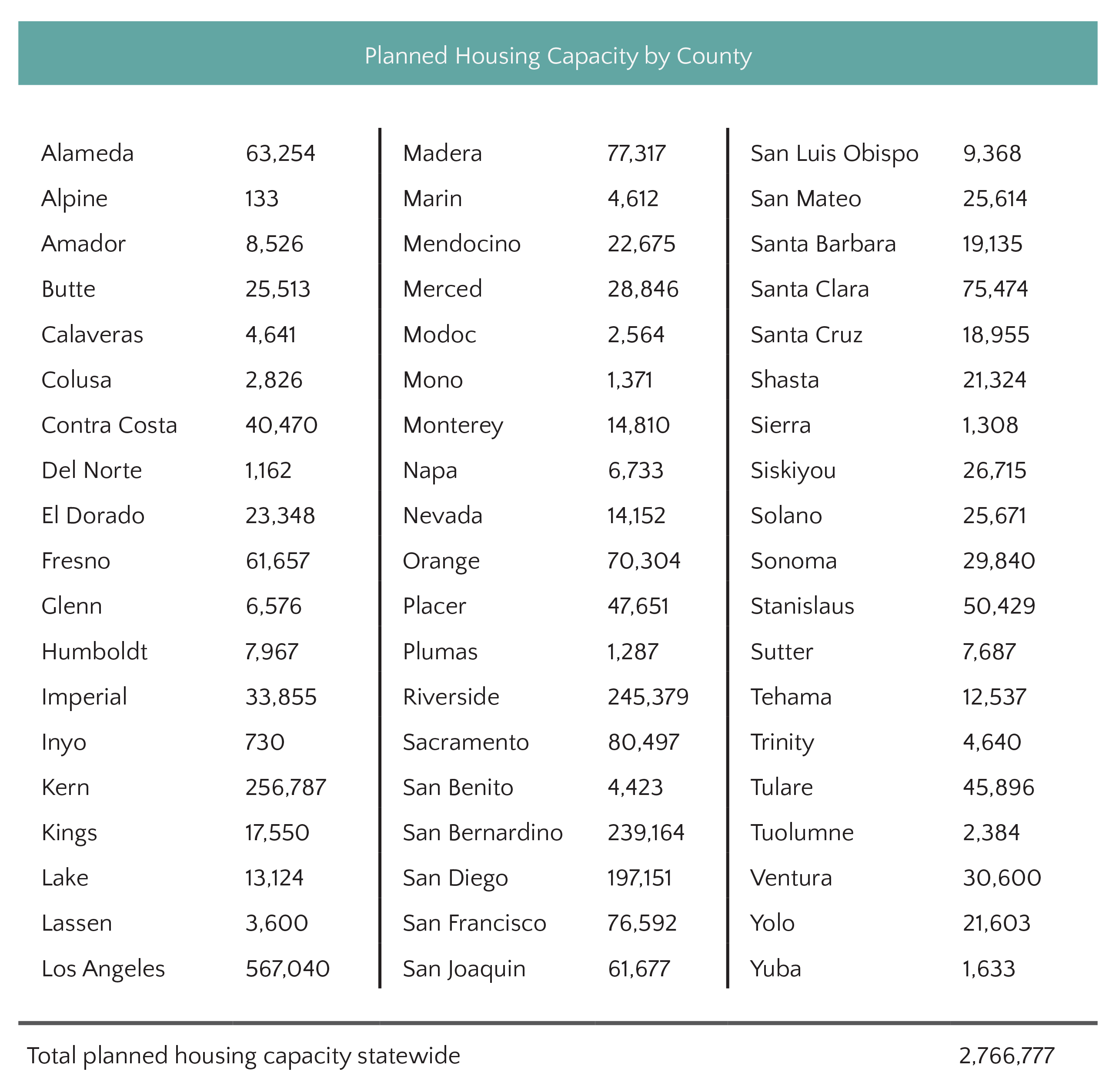 The planned capacity we have is in the wrong places 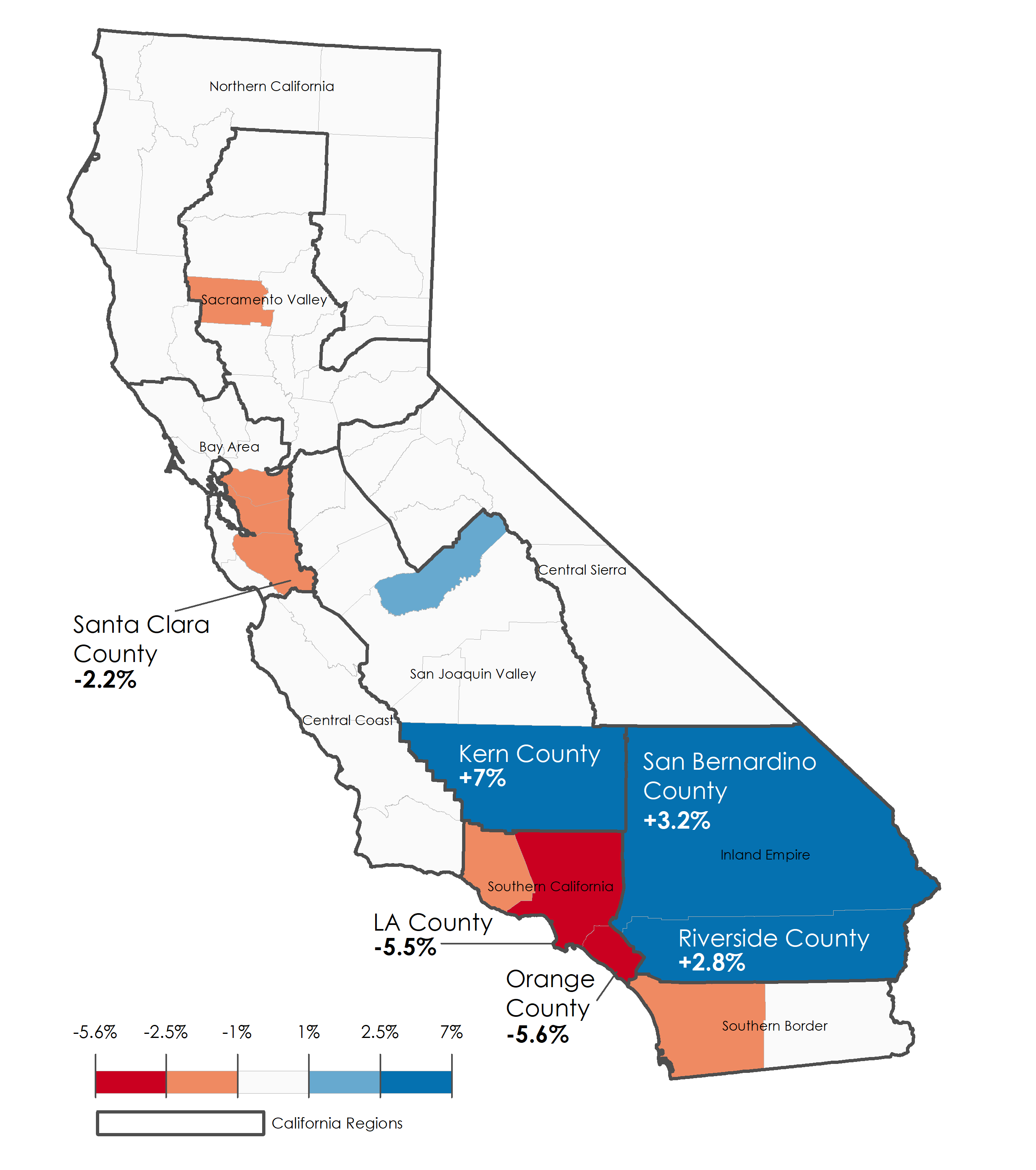 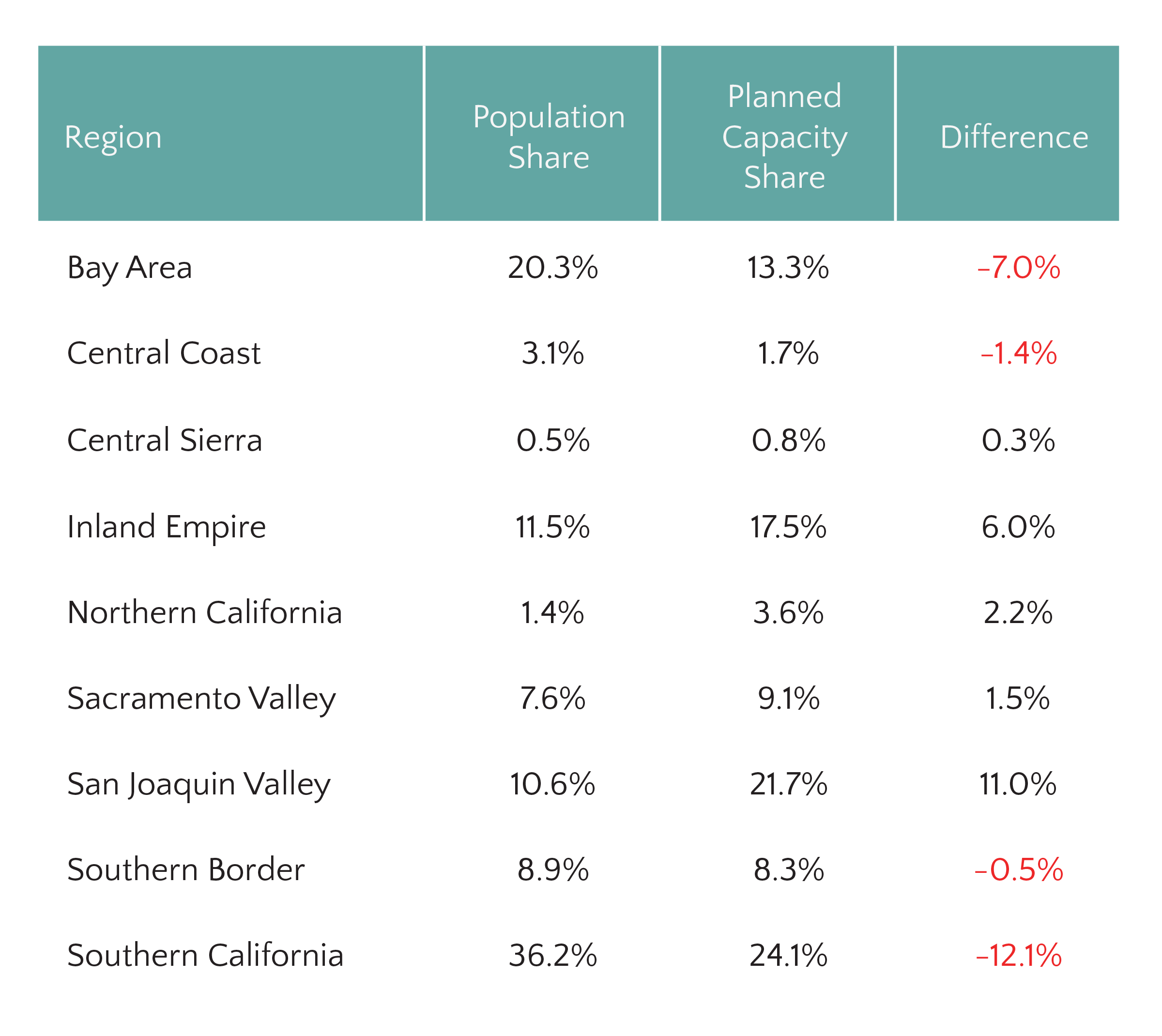 This analysis also suggests the state’s planned housing capacity is located in areas of lower-demand for new housing. Using median sales price as a proxy for demand, we find that counties with higher median housing prices have lower planned housing capacity (Figure 2). Again, the most in-demand regions of the state are the ones failing to plan for sufficient housing.

In Southern California, the situation is especially stark. The high-priced counties of Los Angeles, Orange and Ventura all have planned capacity well below their share of the population. The Inland Empire counties of Riverside and San Bernardino have the opposite relationship. Essentially, were builders to meet the state’s housing demand by filling in the planned capacity, they would be building in areas where the demand for housing is lower, further afield from the urban core.

This relationship between housing value and planned capacity persists within regions as well as between them. In the Southern California Association of Governments region that encompasses Southern California, the Inland Empire and Imperial Valley, previous RHNA cycles have required more new housing in cities on the periphery of the region. Cities with lower incomes and fewer white residents were responsible for planning for a disproportionate percentage of the housing capacity in the SCAG region, regardless of their density or distance to centers of employment. In a particularly stark example from the previous RHNA cycle, Beverly Hills was one of only 13 cities to be in full compliance with their housing element; however, this is because they were only required to permit three new low-/moderate-income housing units. The city went above and beyond by permitting nine.

As part of a broad approach to addressing housing affordability, the governor has set lofty goals for new housing production. In this brief, we evaluate the potential for new housing construction across the state through the Housing Element of each city and county. Housing Elements contain an estimate of planned capacity for new units in a jurisdiction under existing zoning ordinances—essentially how many new housing units could be built?

Not only do we find that California’s current planned housing capacity falls short of the 3.5 million units proposed in Newsom’s gubernatorial campaign, we also find that much of the planned capacity is located in the relatively lower demand, more rural parts of the state. The limited new housing construction in California in the face of increasingly high rents and prices presents a challenge: high demand communities do not plan for or permit housing and planned capacity in low-demand areas remains unbuilt.